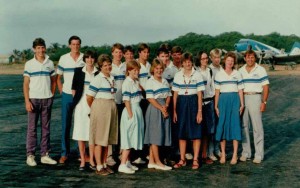 My connection with the island of Roatan began when I was sixteen years old.  I traveled to Roatan with my church youth group for a week long mission trip.  Our goal was to do vacation bible school type programs for churches and communities across the island to share the good news of the gospel message.  My experiences that week shaped the course of my life, and formed a connection with the people of the island which lasts to this day.

While the entire week was transforming there was on person I met who God used in a big way to shape my future.  I first met Burt VanBodden during one of our programs.  I can’t remember exactly how we first met, just that we connected quickly and I spent a lot of time together.  Burt was in a very rough spot as his mother had just passed away and his father was in prison, he lived alone with his sister and her family watching out for him.  Burt responded to the message of the gospel and was baptized later in the week at the church we were working with in Coxen Hole.  We met each day and shared about life and learned from each other. 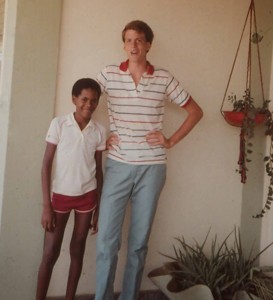 On one of the final days of our trip I was sitting on a park bench across from the church watching the people move up and down main street when all of a sudden a group of 30 boys Burt’s age ran across in front of me.  Immediately I was cut to the heart…I questioned, “who was going to help these boys?”  I had spent the entire week focused on Burt…and there were so many others that needed help.  As I talked about what I was experiencing and feeling with my youth leader I knew that I wanted to work with youth, and I felt compelled to share the love of Christ with a hurting world.  It was not until years later that I saw that experience for what it truly was…my call to ministry.

I left Roatan a different person than when I arrived.  College, marriage, seminary &children were in the future and yet I would often think of Burt and Roatan.  One of my dreams was to return to the place where God had so clearly spoken to me and connect again with the people who make the place so special.

Fast forward twenty five years and I am sitting in Anzi’s restaurant in Locust, NC and Ronny Russell asks, “have you ever been on a missions trip?”  I shared about my experience in Roatan.  He asked, “Have you ever thought about going back?”  I talked about my dream of going back one day.  Ronny then shared about a woman (Claire Maddox) he met in an airport who was doing ministry on the island and how he was thinking of taking Live Again Ministries to Roatan the next summer to partner with Cross Training Sports Camps.  A few short months later I was standing in French Harbor, Roatan. 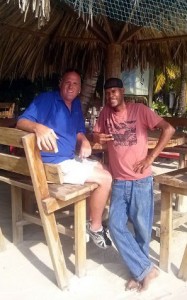 I traveled with Live Again Ministries and Cross Training Sports Camps in 2011, 2012 and 2013.  Each year was different and saw special connections and experiences as we worked to “alleviate spiritual and material poverty” on the island.  I made an extremely special connection in 2013 when some of my new friends helped me track down Burt VanBodden.  We had corresponded for a few years but had lost contact over the years and had not seen each other or spoken for close to thirty years.  When we first met there were some things to work through.  As a young child Burt had thought, “I was coming back to get him” and had been waiting for me to return.  Over the years he had struggled with disappointment and a sense of abandonment.  Life on the island had not been easy for him, work was hard to find and he struggled with alcohol addiction.  As we talked it was clear that we both remembered our times together when we were younger with fondness.  I asked forgiveness for anything I may have said or done that had hurt him, we prayed together and parted as friends.  Ronny Russell has looked up Burt during a couple of trips to the island.  It has been great to reconnect and be able to keep in touch via email.

I have had the privilege of sharing Roatan with Rayann and Joseph.  They both found ways to connect with the people there in special ways.  We look forward to returning  and the count the people of Roatan some of our best friends.