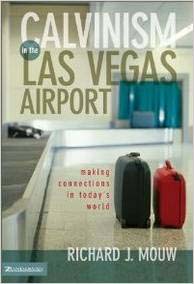 Richard Mouw is president and professor of Christian philosophy at Fuller Theological Seminary. In this book he takes an honest and personal look at how traditional Calvinism has shaped his theological thinking and how it is perceived in today’s society. He begins the conversation by sharing of a clip from a movie where one of the characters attempts to share the basics of Calvinism to a young woman he met in the airport. Sharing not from experience or with story the man enters, or attempts to enter, into a deep theological teaching of foundational beliefs found in Calvinism. As he shares the young woman is far from impressed, in fact she describes his sharing as messed up.

His memory jogged by this experience and from real life encounters with people who express a less than favorable opinion of the theological framework which has helped shape his understanding of the world Richard Mouw begins the journey of sharing… “When I decide to call myself a Calvinist, then, I am serious in my declaration – I am implying that this is a very good way to be a human being who is created in the divine image. And in setting forth the merits of Calvinism, I am obliged to show how this way of being a Christian promotes human fourishing.”

I respect Mouw for the way he takes an honest look at the theological framework which he has used to shape his relationship with God and his ministry. I also respect him for what he describes as living with the tensions that exist inside that framework. Inside any theological framework there are going to be tensions as one tenet “rubs against” another, or as different scripture passages can be used to advance a specific way of thought. For many people that rubbing is uncomfortable and they force resolution, making everything look neat and tidy wrapped up with a big bow on top of it. Mouw would rather,

“…I simply live with both sets of texts, refusing to resolve the tension between what looks like conflicting themes.”

He acknowledges that there are at times struggles, admits that those struggles make him uneasy and encourages debate and discussion while not being paralyzed or allowing polarization because of those tensions.