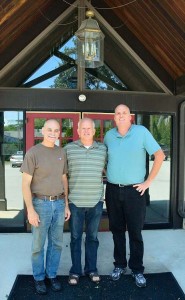 I got quite a special treat today.  I came out of my office and was told there was a very important message.  Roger Vanderwerken, his daughter Christina and their friend Steve were on their way to see me.  Roger was the first pastor I served with when I graduated from seminary.  We worked together at Memorial Baptist Church in Cortland, New York.   He was/is a great guy with a heart for Jesus who loves to help people grow in their understanding and relationship with God.  One of Roger’s greatest strengths, and one of the things that helped me grow the most during the time I spent with him is the fact that he is very secure in who he is.  There are no games, no need to worry about people “stepping on toes”, we shared a common vision and were able to work towards it  very well together.  Roger helped me see and develop my strengths and I would not be the pastor I am today without spending those four years with him.  He left Memorial Baptist to return to the Navy and has served as a Navy chaplain for many years until recently retiring from the navy and now serves as a disciple making pastor for a large church out in California. 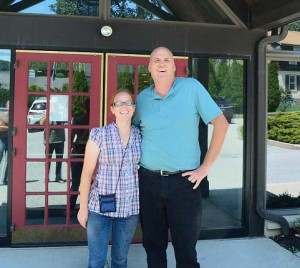 Christina was in Jr. High, maybe a freshman in high school the last time I saw her.  She has grown into quite the amazing young woman!  She is one of two masters trained biologists (there is a special name which you would be impressed with but escapes me now) in the state of California who study algae.  It was great to catch up with her and to see how she has grown and matured.  Steve was one of Roger’s friends who would pop in every now and then when I was at Memorial…it was nice to renew that friendship as well.  I appreciate Steve letting Roger and Christina “get away” the day before his daughter was going to be married…Roger was in town to perform the ceremony.

We had a great lunch together in downtown Kennett Square, talked like we had never parted company…when in fact we had not seen each other for over 10 years.  It is great to have such friends, to be able to build that kind of community…it is the kind of community and fellowship I hope to build during my time here at First Baptist.  Roger, Christina & Steve…I wish you nothing but the best and thanks for thinking of me and taking the time to stop by and say hello.