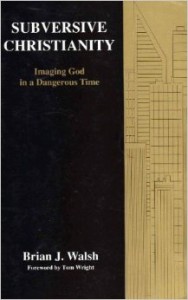 Subversive Christianity by Brian J. Walsh is one of those books I find myself returning to every now and then.  I find it challenging and his thoughts cause me to stop and reflect on how I am seeking to live out my faith on a daily basis.  Walsh writes from the perspective, and I agree, that as Christians we are called to “live out of a worldview or a vision of life that is different from the worldview that dominates western culture as a whole.”  He points to the reality that much of western culture is in direct conflict with the ideas, values and goals of the Kingdom of God that Jesus talked so much about.  When Jesus spoke and taught about the Kingdom of God it caused people to stop and think…it challenged their ideas of what was acceptable and what was right.  My sense is that if Jesus were to move amongst us today he would do much the same thing as he spoke into our western culture, especially our religious institutions.

It is no big surprise, we have learned our lessons well, the lessons we have been taught since birth about looking out for ourselves, about working harder and longer to get the results we want.  Lessons which focused on the “wisdom” of putting up in storehouses for tomorrow while ignoring the reality that some around us live in very real need.  Walsh points out that we have bought into the lies that this is the way the world ought to be…

Walsh contends that we cannot be taken in by these ideas of what is normal…because in the Kingdom of God none of it is normal, none of it is right, none of it is as it should be.  Jesus was hated and despised by the keepers of the kingdoms of this earth as he stood with the lepers and the prostitutes, the outcasts and the downtrodden and opened wide the doors to the Kingdom and welcomed them in.  He stood with his arms around the children (second class citizens in Jesus day) and said, “in my Kingdom you must become like one of these to belong.”  He pointed to the woman whose purse was light but her heart was strong and said, “I long for more like her, more who are willing to give all of who they are to me”.  In short Jesus understood the values of His Father’s Kingdom and he boldly declared them…even when they were totally opposite the values of the kingdom of this earth.

Jesus goal was to be a culture former…not a culture follower.  He knew what it was that would lead people to experience “life to the full” and he knew what it was that would “hold people captive” and he chose to proclaim that which would “set the captives free”.  As I read the gospels I see Jesus move amongst a people held captive by a culture of oppression and I hear him speak words of hope and promise.  I see people come alive as they experience, some for the first time, what it means to be free from the beliefs that have held them captive for much of their lives.

Walsh argues that as followers of Jesus we are to take on a similar role.  We are to move amongst this culture driven by science, technology and economics with grace and mercy teaching that there is another way that leads to “life to the full”.  We will either learn to move within this culture in a subversive way, allowing God to work through us to usher in the Kingdom of God, or we will fall victim to a deadening complacency that many of us know all too well.