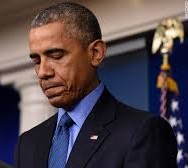 A few short days ago I sat watching my television as the President of the United States came out to address our nation a deeply troubled man.  As he stood and talked about the shootings which had taken place at Emanuel African Methodist Episcopal Church in downtown Charleston, South Carolina there was a deep sadness about him.  You could see the mantle of leadership was heavy.  It felt as if he was asking, “What next?”  “What can I do in the face of such hate, such anger to protect the people of this great country?”  As I watched him speak he recited facts, spoke as a tired old politician and seemed defeated and resigned to what was going on around him.  I got the sense during that conference that if he could have given the job to someone, to anyone…he would have.

Fast forward to today…there was a different leader who stepped to the podium to speak to the family, Mother Emanuel and the nation.  A leader who had, “been thinking a lot about grace this past week.”  A leader who stepped out from behind his own shadow.  A man who refused to be placed into a box that people from different political parties try to force him into whenever they seek to constrain or marginalize him.  A man who had witnessed the power of grace as the family members of those who died spoke words of forgiveness and grace to the alleged shooter.  He had watched his nation struggle to figure out what to do with a symbol that for many represented fear, intimidation, and decades of persecution.  He had witnessed as companies, organizations, business leaders, politicians, and even sections of the government called for the removal of this symbol that just days before had seemed destined to be forever a part of the landscape.  He had watched as God brought good out of something meant solely for evil.  Grace had shown through and he was transformed with the power of “hope for what could be.”

I have listened to his speech three times this evening.  Each time it brings tears to my eyes.  He spoke eloquently, passionately, and truthfully about life.  A number of times I found myself saying, “Did he just say that?”  With laser like intensity he shone a beacon of bright light into the darkest recesses of the soul of our country.  He talked about justice, education, poverty, racism, anger and hate, even a little gun control.  Nothing was off limits and grace was the foundation upon which everything was addressed.  The foundation was grace, not some political platform or agenda to be advanced…it was grace pure and simple.  He talked about how we are to live together as a people now that we have received grace from God.  He pointed a path forward, showing us a way in which we could live our lives to reflect the grace of God to others.

I know there will be those who find fault, those who seek to tear down, those for whom criticism is the only way in which they can respond.  I am sorry.  For some it will be simple jealousy…not many can step into a situation such as that one and deliver a message as thoughtful and clearly focused as his.  Others will be so locked into their own ideological position it will be too threatening to open their ears, or mind, to hear clearly the mans words or heart.  Still others will agree on the issues at hand yet differ on the path forward.  For the latter the temptation will be to embrace the caustic and bitter world of politics and resort to tearing down the person rather than discussing the issue.  Please…for the sake of grace…to keep the dream of hope alive can we rise above that and begin to dialogue in a way that gets things accomplished and moving forward?  The world our President points to, the road ahead that he calls us to will lead us closer to what Jesus called, “life to the full”.  It will lead us closer to the fulfillment of “Thy Kingdom Come, Thy Will be Done; On Earth as It is in Heaven.”  We need each other to reach that place…we need to work and pray together.

If you have not watched President Obama’s eulogy of Rev. Clementa Pinckney it is worth taking the time to listen to his challenging words.