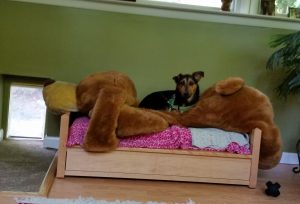 Owen and “Big Dog” in bed

Nancy and Rayann left Saturday for Roatan.  Owen stood at the door as Rayann walked out, suitcase in hand and whined for over twenty minutes.  He paced nervously through the house as if he was looking for something or someone.  I kept telling him she was coming back, she always does.

Over the past few days I have done my part to reassure him that everything will be okay.  I have fed him as per the instructions left for me on the fridge.  Stop and think about that…I have detailed instructions on how to put food into a dog’s bowl.  I have cancer…I have not lost complete touch with reality nor my mind, yet I read the instructions daily and follow to the letter.  Yesterday morning I followed those instructions perfectly and still he just stood at the bowl and looked at me as if to say, “You are not supposed to be feeding me, I will not eat this until the correct person puts food into my bowl.”  Sure enough, when I returned home from the office his food was still in the bowl.  I dumped it out, followed the instructions once again and gave him a new fresh meal.  He chose to eat some of this offering. 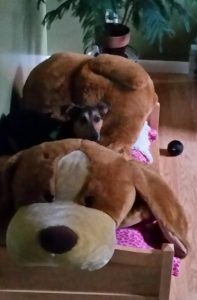 Last night Joseph and I went to the church softball game.  We were gone about two hours.  When we got home every trash can in the house had been emptied and the contents strewn across the floor.  It was not a huge mess, I have learned to empty trash cans frequently, more annoying than anything else.  Torn tissues, empty bags, envelopes up and down the hallway.  Owen does not do this unless he is upset…it is his version of a temper tantrum.  Do something I do not like…fine, let me empty all the garbage cans.  As soon as you come home he hangs his head, will not look at you and runs outside (he has a doggy door) refusing to come back in.  It is almost like he gives himself a “timeout”. 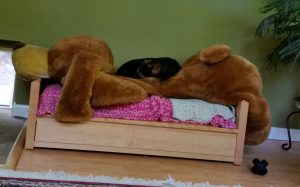 For the past few nights Owen and I have been sharing a room.  Normally he sleeps in Rayann’s room.  In an effort to be helpful I moved his “big dog” into the sun room, where I am sleeping these days thanks to needing to keep my injured feed elevated.  Lest you think that Owen got his own “big dog” and Rayann is totally of her rocker about her dog we have had “big dog” since Rayann was a young girl.  I found it one Christmas season at a Toys R Us as Nancy and I were shopping.  I jokingly went over to it and said something like, “What fool would buy something like this for their child.”  As I picked it up I saw that the price was severely reduced and we had some form of coupon so I could get it for twenty five dollars.  At that moment I became the “fool” who bought the dog for his daughter.   I vacuum packed it into an extremely small box and when Rayann opened it on Christmas morning it kind of “exploded” out of the box!  She has had it ever since.  We have moved multiple time and each time there has been no conversation about “big dog”…he just has to come with us.  Back to Owen, Sunday and Monday night went well.  He slept across the room and we made it through the night.  Last night…was a disaster.  When it was time for bed he ran outside and simply stood there refusing to come in.  I finally got him to lay down but as soon as I started to drift off he got up and ran.  I followed him down the hallway and there he was, standing outside Rayann’s room.  He went in and jumped up on her bed.  You could tell he just needed to “smell her a little”, to be near her.  I ended up sleeping on Rayann’s bed last night with this “depressed and lonely” dog right next to me.

I awoke this am and my feet hurt….I did not elevate them like can on the sun room couch.  I realized I was sleeping next to the dog who has taken on the personality and attitude of a human being.  I thought about the reality that Rayann could go off to college next year and then I would be left in this house with a moody, broody, upset little dog…it was at that moment I began to sink into my depression.

I am going to survive this Cancer thing.  I am not sure I will survive living in this house with Owen if Rayann leaves.  No pressure Rayann.  🙂

Just for laughs I will share with you the video we have of Rayann’s return from Roatan in 2015.  She had been gone for a week and Owen had slipped into one of his “depressions”…watch how fast he works himself out of it when he sees Rayann.