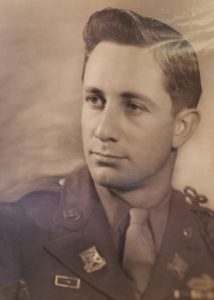 This morning I had the honor of officiating at the memorial service for Fred Osborne.

Fred by the numbers

Fred was married to his bride Josephine for 73 years.

Fred was a WWII veteran. His story is like so many others. Leaving a young bride behind he left to go serve his country.  Wounded in battle Fred was awarded the Purple Heart and Bronze Star. When Fred was well enough to return to active duty, he was selected to be an armed guard to oversee Nazi war criminals during the trials held in Nuremberg, Germany. END_OF_DOCUMENT_TOKEN_TO_BE_REPLACED