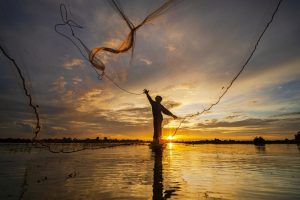 This morning I had a thought that had never occurred to me before.

It is probably more honest to say I experienced a Spirit prompted question that revealed something which had, up till now, remained hidden.

What happened to all the fish?

My morning devotional reading led me to Luke’s gospel, where Jesus is standing by the lake of Gennesaret teaching. The crowd pressed in to better hear what he had to say. Nearby there are some empty fishing boats. The men are cleaning their nets after a long night out fishing.

Jesus steps into one of the boats and asks Simon, the fisherman, to put out from shore just a little. Jesus continues to teach the crowd from the front of the boat. Once the teaching was over Jesus instructs Simon too,

put out in deep water, and let down the nets for a catch.

Simon protests. It has been a long, hard night of fishing with little to show for his efforts. Simon is recorded as saying,

Master, we’ve worked hard all night and haven’t caught anything. But because you say so, I will let down the nets.

Simon and his team let down their nets. They catch such a large number of fish that their nets begin to break. Filled with excitement, they signal to other fishermen who rush out and start to fill their boats. Fill their boats to the point they begin to sink.

Simon and all his fellow fishermen were amazed at the large catch of fish. Simon Peter falls at the feet of Jesus.

What follows is fantastic. Simon, along with his partners James and John, the sons of Zebedee, drop everything and follow Jesus. They become the first disciples to follow Jesus. Luke 5:11 says,

they pulled their boats up on shore, left everything and followed him.

What happened to the two boatloads of fish?

That was my first thought this morning as I read this passage of scripture.

What happened to all the fish these men had just pulled from the water and piled into their boats?

Scripture says they left everything and followed Jesus.

In the past, I have focused on the fact that these men left careers, livelihoods, identities (as fishermen), families, communities and followed Jesus. I have been challenged to question how I would have responded to the invitation of Jesus to leave it all behind and follow him. This story has challenged me to think about how I am following Jesus today.

What am I willing to leave behind to follow Jesus?

This morning my focus was on all those fish. What happened to those fish? END_OF_DOCUMENT_TOKEN_TO_BE_REPLACED