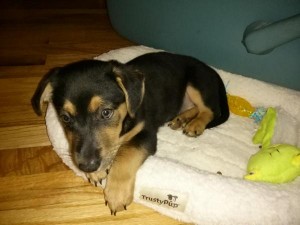 Owen on his first night in his new home

Thursday night we brought “Owen” home to live with us.  Owen is Rayann’s dog.  Apparently he likes to play at night and sleep during the day.  I believe the two of us will get along just fine…we will stay up late watching quality western and syfy movies while the girls go do girl type things and fall asleep early.

When Rayann was trying to come up with a name I offered to help and started with names like Manning, Nouwen, Bonhoffer, Eldridge, Lewis and a few other great writers and theologians who have helped me understand the great God we serve just a little bit better.  She was not a fan and turned her nose at my every suggestion and came back with Owen.

I thought the name sounded familiar and one of my friends helped me out via facebook…John Owen was one of the most famous and influential theological writers of the English world.  So…I got my theological influence (after all…Rayann will most likely abandon me in three to four years for greener pastures and leave Owen with me…it is essential the dog and I bond on a deep level) and Rayann got to pick a name she loved.

I thought I would share a couple of quick quotes from Owen…(the theologian, not the dog)

“Without absolutes revealed from without by God Himself, we are left rudderless in a sea of conflicting ideas about manners, justice and right and wrong, issuing from a multitude of self-opinionated thinkers.”

“If we would talk less and pray more about them, things would be better than they are in the world: at least, we should be better enabled to bear them.“