It is funny what you think about.  The things you remember and are brought to your mind as you go through seasons of trial and difficulty.

I only had the priv 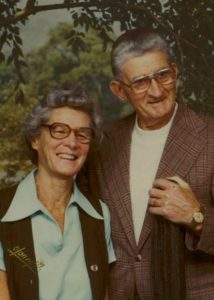 ilege of knowing my mothers parents.  Dot and Joe Entrikin were terrific, God honoring people who lived life in a constant search of a deepening relationship with God.  In my house I have my grandfathers chair and his Bible.  Wh
en you went to visit them he would always be up before you were…no matter how early you got up.  He would be in that chair, Bible open, reading and getting ready for a new day.  Now, if truth be told the older he got you might catch him getting a “morning nap” with the Bible open on his lap.  Either way it was a life lesson he taught without even speaking one word.

My grandfather had a heart attack one of the times he was visiting our family in NY.  He ended up in the hospital in Albany.  We all went up to visit him and we were allowed to go visit him one at a time.  When it was my turn I went back and there was my grandfather talking to the nurse at his bedside.  He was asking her about her relationship with God, asking if she had faith in God.  The woman kept telling him to relax and lay still.  She would try to put an oxygen mask on him and he would pull it off to keep talking to her.  Finally I got involved and told her, “Look, he is clear on what is going to happen should he die here tonight…he is more concerned about you.  If you want him to relax you need to answer his questions.”  She did and then he relaxed and allowed her to do her job.  Pop pulled through that night and lived for quite a time more.  Watching him that night I learned what it meant to care more for others than yourself.

My grandmother was a special woman.  She was the light of Joe’s world and everything he did was to ensure she was happy and provided for.  Dot had sayings, a bunch of sayings.  I always found them interesting and they made me laugh.  One that she picked up somewhere along the line was, “The old gray mare, she ain’t what she used to be”.  She would make a mistake, forget something which she became prone to do later in life and in a moment of clarity she realized something was not right and would simply laugh and say, “Well Daniel, the old gray mare, she just ain’t what she used to be.”  She would laugh again and we would move on with life.  It became her way of making light of what was a difficult transition in her life.  She was not going to let a declining ability to function and think clearly rob her of the joy of life.

These past few days I have found myself speaking the words of Dot time and time again.  Wednesday and Thursday brought on the first effects of chemotherapy treatments.  I would sleep, eat, feel ill, sleep, get ready to do something and then realize I needed to rest some more.  Yeah, the old gray mare, she just ain’t what she used to be.  It made me smile thinking of my grandmother.  Thinking of her laugh and the way she approached the struggles of life in her later years.

When my grandmother moved into a nursing home towards the end of her life we would go visit her on a regular basis.  The first thing she would do when we showed up was show us a little sheet of paper next to her bed.  On that piece of paper she kept a record off all the times she used the bathroom and exactly what she accomplished when she was in there.  These “reports” mortified my mother…my brothers and I found them amusing for all the drama they created.  At every doctors appointment and every conversation I have with nurses these days they always ask how I doing in the bathroom department.  Every time they ask I think of my grandmothers paper by the side of her bed and it brings a smile to my face.

I am thankful for their legacy and for how even now in the midst of this journey God is using them to speak words of strength and comfort and even joy.