When I first met Dr. Soulen treatment felt like such a long way off. Before I knew it Nancy was driving me home from my Microwave Ablation Tuesday night.

I have two small puncture wounds on my right side where the needles went into my liver. With each day there is less pain, and I am healing well. One odd thing is that the symptoms I feel now (difficulty taking a deep breath, and pain in my right shoulder) are the exact symptoms I had when first diagnosed in May of 2016. As my liver slowly heals I am feeling better. I feel much better today than I did when I first came home Tuesday night.

The procedure itself was a blur. I went into a prep room where I had two IV lines put in and got to meet my anesthesiologist. As he talked about the upcoming procedure we got sidetracked. He had questions about what it was like to be a pastor and I liked his pen. I have ordered some new pens which should be arriving shortly. Nancy just sat there with a dazed look upon her face as Joe and I carried on as if nothing significant was about to happen. I found our conversation very relaxing.

A few minutes later I was walked back to the room where the procedure was completed. After a few minutes of getting things set up I had a mask put over my face and that is the last thing I remember.

As I woke up in the recovery room I was told everything went great. I have a follow up appointment in about a month. We will do scans and bloodwork before the appointment to be sure that the treatment has accomplished what we desired.

A number of people have asked, “why radiation was an option this time and not previously.” I asked my physician’s assistant Nicole to help get some pictures of my scans to help tell the story. 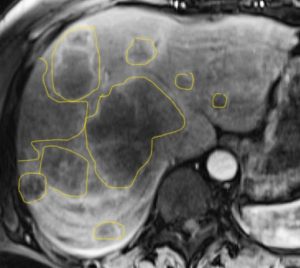 This first picture of my liver is from May of 2016. The areas highlighted in yellow are very clearly metastases. You can see that the liver is significantly enlarged, this was caused by the “innumerable metastases” that were growing there. I did not highlight all the metastases, just some of the larger ones so you can get a sense of what was going on. The liver was enlarged because of all the metastases growing inside of it. Cancer had basically overrun my liver. We needed a treatment that would target the entire liver (and colon) so chemotherapy was the only option.

When it was time for my second treatment my liver still had too many metastases to see a targeted treatment such as radiation as a viable option. Even though my colon was clear the number and size of the metastases in my liver demanded we go with another round of chemotherapy. 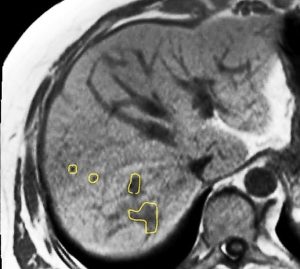 This second picture is from April of 2019. The highlighted areas are metastases. The larger one in the lower left-hand corner is what Dr. Soulen took care of on Tuesday. You will notice that the liver is much smaller. When the reports talk about my liver they now read, “normal size.” Many of the darker areas in the upper half are veins, which are normal, not something you could see in my images from 2016. Some of the areas that may look like metastases are in fact dead cancer cells which will slowly disappear, or at least not grow.

The Microwave Ablation (MWA) treatment I had Tuesday is a very targeted therapy. It is good to address smaller areas of cancer. When there is wider spread cancer, such as in my 2016 image, radiation would not be a good choice.

A Reminder of Carol

As I talked with my anesthesiologist  Tuesday afternoon I was reminded of Carol. There were a lot of people moving around within this hospital who were making my treatment possible. The gentleman who drove the shuttle bus from the parking garage to the hospital, he could not tell me how many round trips he makes in a day. The people at the welcome center who knew exactly where to send us. The nurse who received us and helped me laugh and relax even though I was nervous. I had four nurses who helped prep me for the procedure. All of them working as a team to make sure I was ready for the doctor. The team within my procedure room. We had an amazing conversation about dining in Kennett Square, training to be a pastor, and a nurse who just left to be a pastor in the moments before surgery.

I am thankful for this opportunity. A few days of recovery sure beats every other week of chemotherapy for six to eight months.

This Microwave Ablation is something that we can revisit and do again should there be other small spots in my liver that decide it is time to grow.

Overall, I am in a very good place, and am thankful for the support of friends and family.