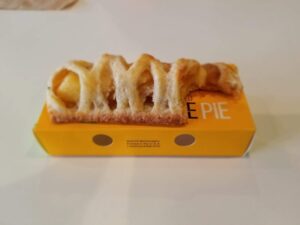 Misplaced emotions can be strange things. My emotional reaction to a “bad” apple pie revealed I was wrestling with deeper things.

It happened again the other day. McDonald’s got me.

The fact that this has happened more than once should probably embarrass me. But, instead, it got me thinking.

Nancy and I were traveling back from Rochester, and we stopped at McDonald’s to use the restroom and a quick bite to eat. As I was finishing up my meal, I felt myself longing for something more. I was craving an apple pie.

Nancy went up to the counter and ordered two apple pies. The anticipation was almost too much. I could not wait to open up that small rectangular box and slide out the gift of apple goodness.

I was polishing off the last of my fries as Nancy returned. The timing was perfect.

Opening the pie, my heart sank. Oh yeah, they started baking their pies.

Only an apple pie 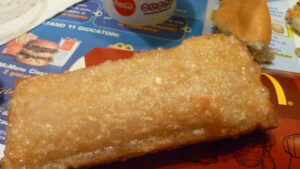 What I longed for was the apple pie of my youth. The deep-fried, so hot it would blister your mouth apple pie. You could hear the crust crunch as you ate it. Never mind the fact that your arteries were clogging with each bite. A fried apple pie from McDonald’s was living!

Sitting there looking at this baked pile of mush, I was crushed. Disappointment rolled over me. I actually heard myself say, “it’s only an apple pie.”

What was the source of all those emotions? How in the world does something as simple as the memory of an apple pie from McDonald’s trigger such reactions?

Growing up, McDonald’s was a treat. An apple pie following the meal was the treat upon the treat. The older I got, it became my job to go to the counter and order the apple pies when we were lucky enough to get them. My first solo trip to a fast-food counter was at McDonald’s ordering four apple pies. Mom had taken her three boys out to lunch. We had behaved just good enough to warrant the treat, or maybe mom needed an apple pie to get through a particularly tough day. The world may never know. Either way, as I stepped to the counter, I was filled with excitement. Here I was, out on my own, ordering apple pies for my family—all under the watchful eye of my mother a few feet away.

Fast-forward a few years, and I was hanging out at McDonald’s with friends. Apple pies were cheap. You could get several pies for a few dollars, which earned you extra time to “hang out in the booth.” Whatever the reason, those fried apple pies were familiar, comfortable, a piece of my childhood. Now they are gone, replaced by some half-baked imposter.

Emotions are funny things. You think you have everything under control, and then something as simple as an apple pie gets you all twisted up.

My misplaced emotions revealed something deeper.

Our trip to Rochester was all about meeting with some doctors to explore the possibility of doing a liver transplant. The only place my cancer shows up is in my liver. A new liver would mean my cancer (as we see it today) would be gone, and some of my other liver issues could be resolved. The ride to Rochester was filled with anticipation and hope.

I underwent myriads of tests and met with every doctor who would be on “my team” if we moved forward with the transplant.

A prayer for peace

Thursday was a big day. I was going to meet multiple surgeons who would play a role in the transplant process. As we headed to the hospital, I prayed for peace. Not peace to move forward, peace no matter which direction we choose.

Throughout the day, Nancy and I listened as the doctors explained, in great detail, what the surgery would involve.

My liver has undergone significant damage due to five years of chemotherapy, especially damage caused by the Hepatic Artery Infusion pump.

A new liver would need to be attached to my body at four locations. Each location “had issues.” My surgeon reviewed those issues in great detail and went over plans A, B, and C to address each one of them.

As we talked, he said, “If you had a problem with one location, it would be cause for concern; two locations I would be nervous. Dan, you have problems at every location.”

I had hoped this transplant would cure me of cancer and restore me to pre-cancer health. It will not. Some of the very things I am concerned about now would still be a concern following the surgery.

If I had the transplant, I would be on Immunosuppressant drugs for the rest of my life. Should the cancer return, a very real possibility, my treatment options would be severely limited.

As the day progressed, I was strangely at peace. The longer Nancy and I discussed it, the more at peace we were. A peace that while these doctors are doing fantastic work, this is not the right option for me right now.

Yes, there is a sense of disappointment. I was first able to express it when looking at that poor excuse of an apple pie sitting before me in McDonald’s.

Unable or unwilling to speak of the disappointment surrounding the transplant, I could direct every ounce of those emotions towards McDonald’s.

I was a few miles down the road before I realized what I had done. As Nancy and I continued our conversations regarding the transplant option (which is not an option right now), we spoke with deeper honesty about how we were feeling.

This is not the first time I have misplaced emotion or energy.

Something, someone, or a situation in life causes me pain or disruption. Not knowing how or being unwilling to speak directly to the source of my pain, I share my emotional energy in a different place.

I have seen it in myself, watched it in others, witnessed it in communities. Learning to feel what is going on inside and speaking directly to the source of our hurt and pain is part of maturing.

I guess I am still working on that.

Let’s work at it together.